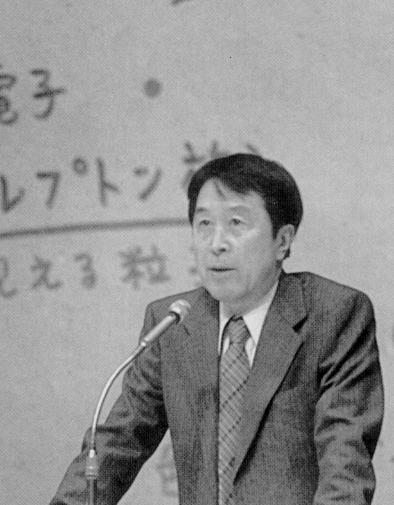 Yoichiro Nambu
The proton, the nucleus of the Hydrogen atom and the building block of all nuclear charge, has a mass of about 0.938 GeV/c2 or 1.67 10-27 kg and a spin angular momentum of 1/2 unit of Planck's constant. For most of the 20th century the proton was thought to be a point-like particle. We now know, however, that, instead of being point-like, the proton has a radius of about 10-15 meter and that it is a complex dynamical system consisting of three "quarks". The dynamics of this bound system are still imperfectly understood but it is well-established that the underlying theory is the SU(3) gauge theory now known as "quantum chromodynamics". This theory of the strong interactions was proposed by Yoichiro Nambu in 1965.

The proton is a color neutral combination of three colored quarks (one of each color). The quarks are bound together by the exchange of color gluons. The emission or absorption of a gluon causes the quarks to make a transition from one color to another. Unlike the simplified animation presented here, the gluons are associated with two colors, that of the emitting quark and that of the receiving quark. "Color" in this context is used to specify a property of quarks having three possible values and is not meant to be taken in the literal sense of color as it appears to the human eye.

Nambu's original motivation for proposing the theory was the observation that such a force would guarantee that the lowest mass states were color "neutral". It is now thought, in fact, that non-color-neutral hadrons would have infinite mass.