skip to main content
Unfortunately, due perhaps to Nambu's modest demeanor, I and most of his students were slow to realize the full profundity of his ideas. We were there when he told us that he felt the strong interactions were an SU(3) gauge theory acting on a triplet of quarks. The motivation was that this would ensure the ground states were color singlets. This seemed somewhat heuristic to us unexperienced students. Nevertheless, we pored over the requisite books on field theory and particle physics and derived excitement from the weekly "Cyclotron Seminars" which featured the latest theoretical and experimental efforts from around the world. I eventually wrote a dissertation on current algebras and K meson decays following Nambu's papers on the Partial Conservation of the Axial Current (PCAC) and went on to a post-doc position at Yale. A truism about Nambu's ideas spread through the physics community: the importance of his insights could only be appreciated five years later.

In the Chicago physics of the 1960's Nambu served as a bridge between two important camps. The ideology of the conservative camp was that new physics should only be invented when demanded by the data. The main players in this camp were Gregor Wentzel, the co-author of the world famous WKB method, Richard Dalitz, inventor of the Dalitz Plot, and Reinhard Oehme, the local expert in mathematical physics and analyticty. When exposed to some speculative theory in the Cyclotron Seminar, Dalitz once remarked "if he is right we will have to listen to him". The implication was that one should not waste time on the idea until forced to.

The liberal camp was defined by the idea that one should constantly push the envelope exploring what new theories might still be consistent with the data even if not required. This camp was primarily made up of J.J. Sakurai and Peter Freund. Once when Sakurai was presenting the results of some novel assumption, he was asked "Why do you want to assume that?". Sakurai immediately replied "Why not?"

Nambu sympathised with the liberal camp but also saw that speculations were much more interesting if they provided some aesthetic or phenomenological advantage. It was from this point of view that he pursued the "partial conservation of the axial current" (PCAC) and developed the insight with Goto that the dual models of particle interactions were, at a fundamental level, a theory of relativistic strings.

Nambu's style in directing students was to suggest promising areas of research but to encourage maximum self-reliance. He never insisted his students give regular reports on their progress. However, when they felt they had reached a dead end and called for an appointment with him, he would invariably invite them to come immediately up to his office. This worked well for some students but was a disaster for others. One of them languished for ten years before finally getting his doctorate.

Nambu had great human empathy. Once, one of his students was hospitalized after having been mugged on the south side of Chicago. Nambu was there to see him in the hospital and even supported him on his shoulder down to the X-ray facility. One of his most brilliant students rose rapidly in the academic ranks after his PhD but soon succumbed tragically to alcoholism. He returned jobless to Chicago and Nambu on several occasions helped him from his own pocket. ​ 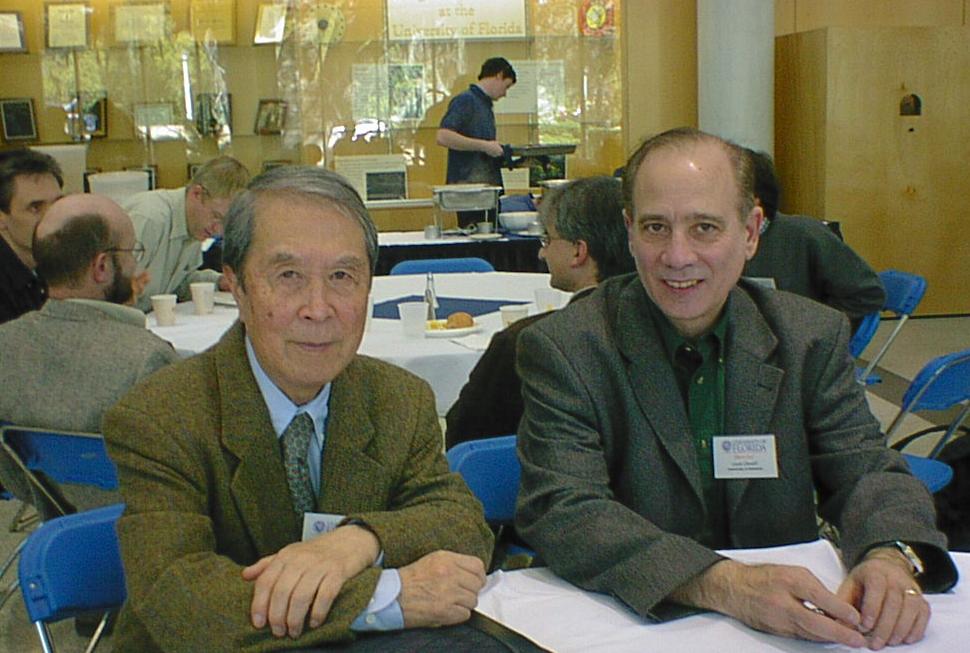 Nambu's sympathy extended to humanitarian causes beyond the physics world. On one occasion a theory student asked him to put his name down in support of a demonstration against the production of napalm to be dropped on Vietnam. Nambu acquiesced but, as a result, he came under FBI investigation and was only saved from deportation by the intervention of senior members of the national physics community. Partially to protect himself from this type of witch hunt, Nambu became a US citizen in 1970.

Nambu's lectures might not have been as polished as those of some of the other professors but they inspired his students to burn the midnight oil working out the necessary details. He would not have been sympathetic to the current academic fashion that holds that a good teacher should be able to pour knowledge into his students with minimal effort on their part.

The depth of Nambu's curiosity extended far beyond natural science. He talked to me once about John Polkinghorne who abandoned a distinguished career in theoretical physics to become a priest in the English church studying ancient greek in order to better analyze what happened 2000 years ago.

He and I last met in 2003 in Gainesville Florida. Nambu no longer casts a shadow on the streets of Kyoto and Chicago but he still casts a long shadow in physics theory.